Poppy was just shy of her fifth birthday when she started experiencing pain in her legs, increasing lethargy and a diminished appetite. As her leg pain worsened, her mother called Poppy’s primary care provider to request an appointment. The doctor ran blood tests and sent the family home. Days later, Poppy’s mom, Claire, received a phone call from the doctor explaining that Poppy’s results were alarming and they needed to return to the doctor’s office immediately.

That day, everything changed.

Poppy was sent to see a pediatrician in Bedford, a nearby town in England, where she lives with her mom, dad, and little brother. The hospital ran a slew of tests and imaging — finally revealing a large tumor at the back left-hand side of Poppy’s chest cavity. It was wrapped around her heart and pushing against her lung. Poppy was officially diagnosed with stage IV high-risk neuroblastoma.

“I remember she was diagnosed on a Friday, and the doctors said, because she had quite a lot of metastatic disease, they wanted to get started with treatment right away. They said, ‘We don’t normally start treatment on the weekends, but we have no time to lose,'” said Claire.

The Initial Treatment for Poppy’s Neuroblastoma 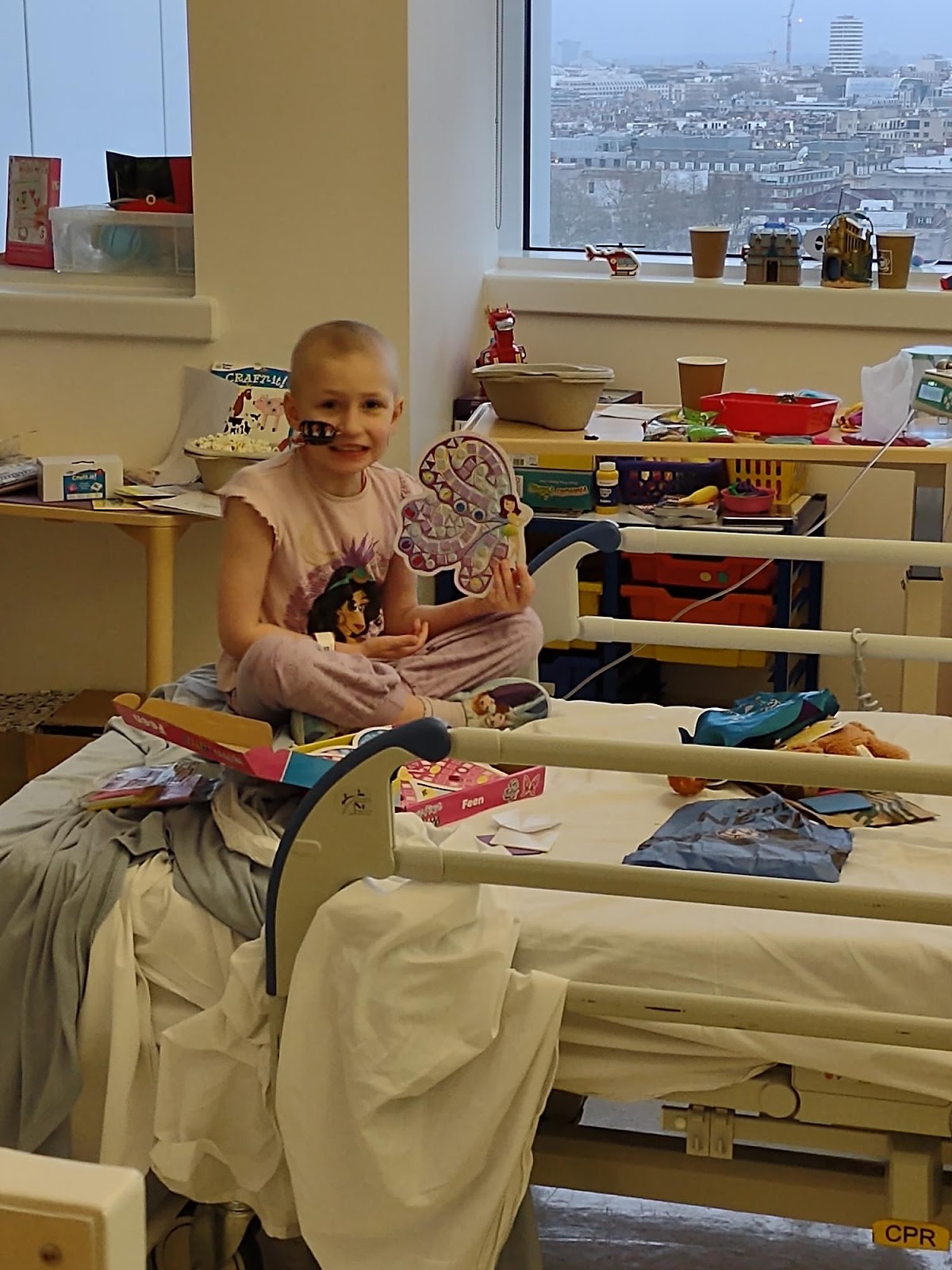 That Saturday, Poppy started rapid COJEC induction chemotherapy — the “cycled administration of the chemotherapeutics cisplatin, vincristine, etoposide, cyclophosphamide and carboplatin” — and the standard protocol for neuroblastoma treatment in Europe. Poppy underwent eight cycles of treatment, every 10 days, in the fight of her life.

As Poppy’s mom described, “It was very intense. The doctors told me that Poppy coped well, but I thought she was quite sick during the treatment.”

At the halfway point of Poppy’s initial treatment, urine tests that measure for the levels of VMA (vanillylmandelic acid) and HVA (homovanillic acid), two metabolites that are excreted from tumors like neuroblastoma, and computed tomography (CT) scans showed that Poppy’s body was responding well to treatment.

“When we got to the end of treatment, it hadn’t done as much as we thought. But when you look at the big picture and how much metastasis Poppy had, I’d estimate we got rid of about 70%,” said Claire.

But Poppy wasn’t ready to move on to the next stages of treatment and instead doctors recommended that she undergo two rounds of topotecan and cyclophosphamide in outpatient chemotherapy.

Claire explained, “When she had her scans, it hadn’t done much, so the nuclear radiologist suggested we do another two rounds. Again, it didn’t do much, but Poppy remained stable.”

While Poppy’s family was waiting for her blood counts to recover, Poppy had an ovary removed — a common method of fertility preservation for cancer patients. And once she was well enough to resume treatment, she started two rounds of IT (irinotecan and temozolomide) chemotherapy. Irinotecan is administered intravenously, while temozolomide is an oral chemo.

Newfound Hope for Poppy With the MiNivAn Trial

Neuroblastoma cancer has a high relapse rate (over 50% in high-risk cases, like Poppy’s), and after relapse, fewer than 10% of children remain alive after five years. After Poppy’s initial treatment, her disease was categorized as refractory, meaning it was no longer responding to chemotherapy. In order for Poppy to move on to high-dose chemo and an autologous peripheral blood cell transplant, she needed to have a SIOPEN score, which scores the amount of disease across 12 body segments, of 3 or less (Poppy’s was 33).

But for families like Poppy’s who have exhausted their options, there is newfound hope in the MiNivAn clinical trial at the University Hospital at Southampton.

Helmed by Dr. Juliet Gray, Associate Professor and Consultant in Pediatric Oncology, the clinical trial is testing the safety and efficacy of a combination of three drugs in relapsed or refractory neuroblastoma. Two treatments of targeted radiotherapy I-131 meta-iodobenzylguanidine (MIBG), followed by five cycles of a combination of two antibodies, anti-GD2 (ch14.18/CHO or dinutuximab-beta) and anti-PD1 (nivolumab). Laboratory studies show that this combination could be effective in eradicating tumors.

Poppy received the last spot in the second cohort for the MiNivAn trial at Southampton and another chance at recovery. “Our doctors told us we don’t know how long it will be until the next cohort, so it’s now or never,” said Claire.

How the MiNivAn Trial Works

The MiNivAn clinical trial consists of patient cohorts that undergo a combination of inpatient and outpatient treatments for 30 weeks. Cancer Research UK outlines the MiNivAn trial design as follows:

During the MIBG therapy, Poppy had to isolate herself along with her family for two weeks. Patients can expect to do the same and will have to remain in the MIBG room due to the highly radioactive nature of the treatment.

During the MiNivAn trial, patients will either receive inpatient or outpatient care:
• Inpatient for initial MIBG therapy
• Outpatient for nivolumab
• Inpatient for dinutuximab beta for the initial two treatments, then patients can finish subsequent treatments at home if their side effects are manageable. Therapeutics are
delivered via a small pump connected to a central line.

Poppy’s Response to the MiNivAn Trial

While every neuroblastoma patient undergoing MiNivAn treatment will respond differently, Poppy’s mother reports that the therapy was well-received overall.

“It’s important to say that the MiNivAn trial was brilliant for Poppy — and all of us, really. When you’ve been stuck in a hospital with no visits, having horrendous chemo with the most terrible side effects, everyone can feel quite down.”

And as Poppy’s mom went on to explain, the preliminary MIBG therapy was not as bad as she thought it would be, stating, “There weren’t really any side effects, and the isolation wasn’t as bad as I anticipated. I was very close to her and could see her all the time.”

The minimal side effects continued with the immunotherapy. While Poppy did experience fevers with the dinutuximab treatment, she had little to no pain. In fact, during Poppy’s outpatient treatment for neuroblastoma, she and her family would go sightseeing, play at the parks and visit the zoo. The family stayed nearby at a Young Lives vs Cancer Home from Home — which offers cancer patients and their families a place to stay while receiving cancer treatment.

Eventually, Poppy was able to go back to school and enjoy the carefree moments that a child her age should — without the debilitating side effects many children experience undergoing toxic treatment for neuroblastoma. “It almost felt like we were living quite a normal life. In my mind, the trial will always be a happy memory for us,” said Claire. 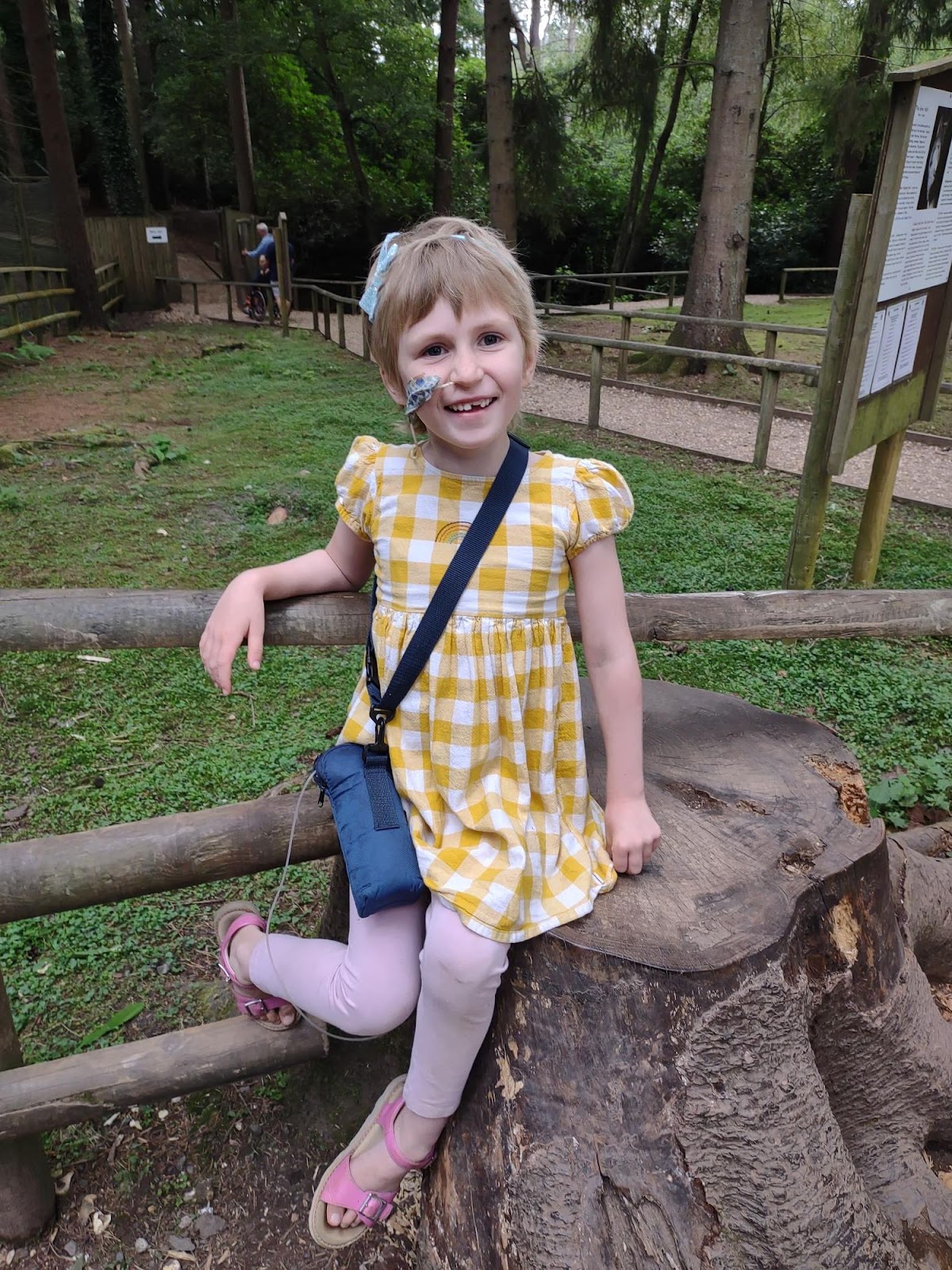 Poppy’s scans showed that she had 33 spots at the beginning of the trial. “I had never heard that number before, and I was quite shocked at how many there were,” explained Claire.

But several months into the trial, Poppy’s new scans demonstrated that treatment was working in her favor. As her mom reported, “The doctors had gotten down to nine spots, so we were pleased it was going in the right direction. My mom, Poppy’s grandmother, said, ‘quite simply, the trial saved Poppy’s life.'”

Since finishing the MiNivAn trial, Poppy completed one more round of IT chemotherapy as holding chemo while she waited to have surgery for the primary tumor in her chest in December 2021.

After surgery, Poppy’s frontline treatment for her neuroblastoma continued with high-dose chemotherapy and autologous peripheral blood cell transplant, followed by radiation every weekday for three weeks. Then, just this May, Poppy started receiving additional immunotherapy with double the dose of dinutuximab beta (the same drug from the MiNivAn trial) in conjunction with isotretinoin (cisRA) — a vitamin A derivative. And for the next six months, Poppy will receive immunotherapy for 10 days every month.

Nothing about Poppy’s journey has been easy, but considering all she’s been through, her cognitive and physical abilities are fully intact, her weight is on track for a child her age, and her overall health remains stable.

But as Poppy gets older, her mom said, “Poppy’s starting to question things a bit more, and it’s getting harder to keep up my morale as a parent in the midst of this battle.”

Questions aside, Poppy is still the bright, funny, and talkative little girl her family knows so well. And after almost two years of cancer treatment for neuroblastoma, hope remains — because it has to. Because as Poppy’s mom said, “There is nothing you wouldn’t do to save your child.”

The impact of childhood cancer is pervasive. It’s a part of every moment of every day. It’s a burden that parents like Poppy’s shoulder, hoping that their child will overcome this cruel disease one day.

At Solving Kids’ Cancer, we prioritize and fund innovative preclinical research and early phase clinical trials with a strong rationale for potential benefit to children with poor prognostic cancers — like high-risk neuroblastoma.

We are proud of the collective work we have achieved alongside other nonprofit organizations to help fund Poppy’s MiNivAn trial in England and Greifswald University Medicine in Germany and the University of Wisconsin-Madison’s American Family Children’s Hospital in the United States.

But clinical trials need funding in order to continue. In fact, the American Society of Clinical Oncology reported that “Additional investment to strengthen the conduct of trials funded by nonprofit organizations is essential.” They also highlight two key challenges that have to be overcome in order to realize long-term, mainstream treatment options for children with neuroblastoma:

• Significant clinical trials have to continue

When you give to Solving Kids’ Cancer, you help support the development of more effective treatment options for children facing pediatric cancer like neuroblastoma and provide patients with another chance at discovering a life-saving cure — because Every Kid Deserves to Grow Up®.