March 29, 2017 – NEW YORK, NY:  Lorlatinib, an investigational drug candidate currently in late-stage clinical development for the treatment of lung cancer may also prove effective for the treatment of the pediatric cancer neuroblastoma. Solving Kids’ Cancer is leading an international effort of like-minded nonprofits to provide nearly $400,000 of collaborative funding for an innovative clinical trial to bring a potentially life-saving therapy to kids.

The phase I trial will be co-led by Dr. Yael Mossé at Children’s Hospital of Philadelphia (CHOP) and Dr. Araz Marachelian at Children’s Hospital of Los Angeles (CHLA), and will be conducted in 14 hospitals in the United States and Canada through the New Approaches to Neuroblastoma Therapy (NANT) consortium, as well as two European sites including Royal Marsden in London and Institut Curie in Paris.  The study focuses on a subset of neuroblastoma patients with mutations in the anaplastic lymphoma kinase (ALK) gene. Abnormal ALK genes are found in 15 percent of high-risk neuroblastoma patients and portend a very poor prognosis.

The primary objective of this study is to identify a recommended Phase II dose and assess the anti-tumor activity as a result of administering this investigational drug candidate in pediatric patients with ALK-driven neuroblastoma. Lorlatinib is a next-generation ALK/ROS1 tyrosine kinase inhibitor that has been recently reported to show very compelling responses in lung cancer patients with ALK aberrations. The drug was specifically designed to inhibit tumor mutations that drive resistance. One important feature of this drug is that it penetrates the blood-brain barrier and may be effective in patients with relapsed neuroblastoma in the central nervous system.

“Lorlatinib has shown dramatic results in the lab against ALK+ neuroblastoma tumors in mice,” said Dr. Yael Mosse, the physician-scientist who discovered ALK mutations in neuroblastoma and led the preclinical investigations at the Children’s Hospital of Philadelphia.  “If this trial proves successful, we expect the drug to quickly become part of frontline therapy in children with ALK-driven neuroblastoma – which is a tremendous accomplishment in cancer research, overall.”

The hope is that this trial will provide a foundation for future work, which could lead to approval by health authorities for this use. Only three drugs have ever been approved for pediatric cancers, and this would set a remarkable precedent for rapid introduction of a new drug.

“We are very pleased to be supporting a clinical trial site at the Royal Marsden Hospital, London, which enables children in the UK to access this exciting new agent close to home,” said Stephen Richards, Chief Executive Officer, Solving Kids’ Cancer Europe. “The trial, which is also accessible in continental Europe, marks a significant international collaboration and is something we are very proud of — effectively speeding up the advancement of better treatment for children with neuroblastoma.”

Childhood cancer is the leading cause of death by disease in the United States, and neuroblastoma is pediatric cancer that strikes mostly infants and young children. The aggressive cancer originates in the sympathetic nervous system and manifests as tumors in the neck, abdomen, and pelvis.

“We are excited to see such an innovative clinical trial come to fruition, and we are grateful to our partners who helped fund the gap so that we can continue in our joint mission to improve the overall survival rates for children diagnosed with neuroblastoma,” added Scott Kennedy, Executive Director, Solving Kids’ Cancer US.  “This study represents an unprecedented collaboration between academic researchers, industry and charities to rapidly advance an exciting new agent, and provide access to the children who need it.” 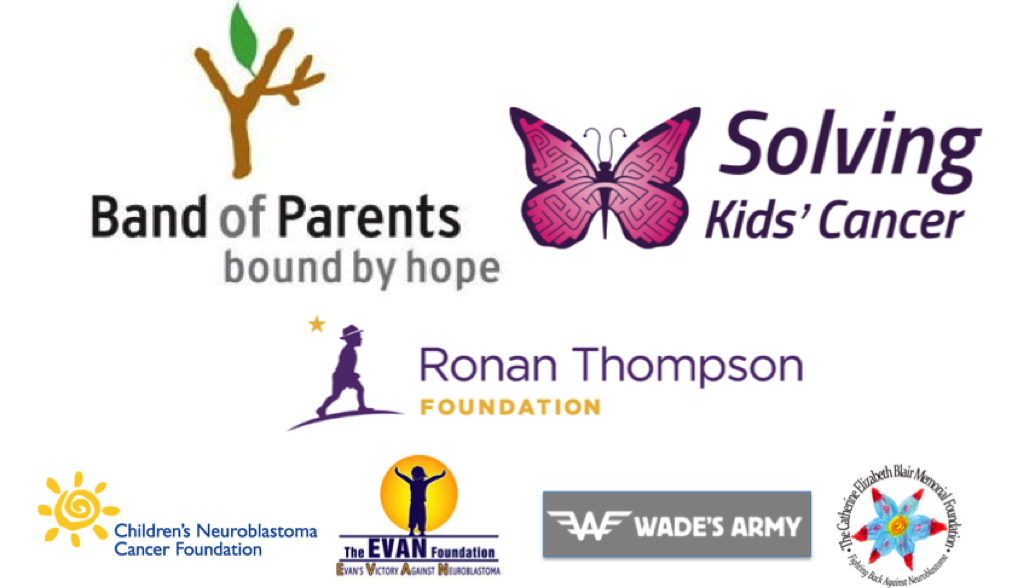