Diffuse intrinsic pontine glioma (DIPG) tumors are extremely difficult to treat due to their anatomical location. But advancements in research and greater DIPG awareness are leading to more hope for patients with this type of rare pediatric brain tumor. This article covers the basics of DIPG cancer, what advancements in research mean for patients, and Solving Kids’ Cancer’s role in finding a cure. 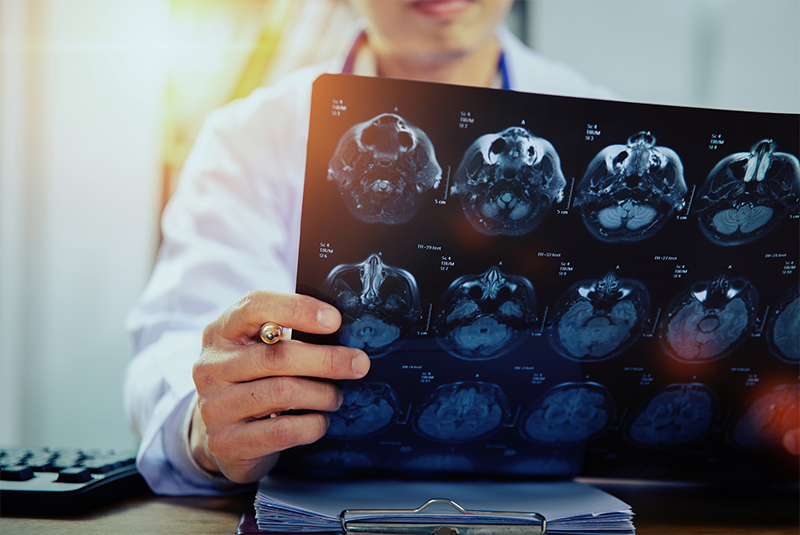 What is DIPG Cancer?

A DIPG tumor is a walnut-sized, aggressive, and malignant brain tumor located in the pons (middle of the brainstem). The pons is a delicate structure responsible for various functions, primarily the regulation of the autonomic nervous system — which is divided into the sympathetic and parasympathetic nervous systems.

Signs & Symptoms of a DIPG Tumor

A DIPG tumor moves quickly, and signs and symptoms of the tumor are typically present before an official diagnosis. DIPG signs and symptoms can include but are not limited to:
• Weakness in the arms and legs
• Facial weakness and drooping
• Changes in vision/eye movements (double or blurred vision and uncontrolled movements)
• Problems with chewing and swallowing
• Issues with balance, coordination, or walking
• Headaches (particularly in the morning) or that subside after vomiting
• Nausea and vomiting
• Changes in behavior or personality (irritability, aggravation, and anxiety)

Diagnosis of a DIPG Tumor

DIPG cancer is very rare, affecting about 300 children in the United States per year. Due to the aggressive nature of this tumor, most patients are usually Grade III or IV before they receive a diagnosis. And, out of the total number of children diagnosed with a brain tumor each year, about 10 to 20 percent are DIPG. While this type of tumor generally affects children aged five to ten years old, it can occur in older children, though this is rare.

To officially diagnose a child with DIPG cancer, doctors will recommend they undergo medical imaging such as a computed tomography scan (CT scan) or magnetic resonance imaging (MRI) to determine the exact location of the tumor within the brain and its size.

Doctors may also recommend that a child undergo magnetic resonance (MR) spectroscopy, which “provides a non-invasive ‘window’ on biochemical processes within the body” or, more specifically, the brain of a patient who may have DIPG cancer. Doctors may also biopsy the tumor as part of their diagnostic process.

Due to the tumor location in the pons region of the brain, surgical intervention is not possible without the significant risk of damaging critical parts of the brainstem. Therefore, the only existing treatment options include chemotherapy and radiation.

In terms of chemotherapy treatment, any oral or intravenous treatments must cross the blood-brain barrier, which only allows a small fraction of therapy to enter the brain and get to the tumor site. Additionally, any drugs introduced to the body to fight the tumor are usually administered in such high doses that debilitating side effects occur, greatly affecting a patient’s quality of life.

Radiation is one of the only effective treatments to shrink DIPG tumors in children older than three years. And while some oncologists use chemotherapy treatment in conjunction with radiation, there is still little evidence to support that it increases the overall survival rate.

Whether children receive chemotherapy, radiation, or both, the life expectancy of a child with a diffuse intrinsic pontine glioma is typically less than a year.

Advancements in Treatment for a DIPG Tumor

While the prognosis for DIPG cancer remains poor with traditional treatment modalities, there have been advancements in treatment through clinical trials that provide newfound hope for a better future for patients.

When leadership from Solving Kids’ Cancer reviewed Dr. Souweidane’s original research proposal, it was exciting to see his application of convection enhanced delivery (CED), a procedure used to bypass the blood-brain barrier to deliver a therapeutic agent directly into the tumor via a surgically placed infusion cannula. This method first proved beneficial in neuroblastoma patients who had relapse to the brain — providing insight that it could also be applied to patients with DIPG cancer.

Solving Kids’ Cancer was instrumental in bringing Dr. Souweidane’s innovative concept of DIPG treatment to patients by helping fund his breakthrough clinical trial. The phase 1 clinical trial of CED had promising results. Not only was the procedure itself effective, but the amount of therapeutic agent delivered to the DIPG was 1,200 times greater than a whole-body dose as with chemotherapy.

In 2019, Dr. Souweidane presented an update on his clinical trial at the American Society of Clinical Oncology (ASCO) meeting. Again, the findings were compelling and showed “an increase in overall survival time to a median 27.2 months, with a range from 11.5 months to 72.4 months (more than six years, for a disease that rarely sees more than a one-year survival time).”

Throughout his studies, Dr. Souweidane and his team have examined hundreds of pediatric brain tumor samples and found that, in most cases, tumors had a high expression of the B7-H3 protein compared to healthy samples. This discovery was significant enough to determine B7-H3 as a target for anti-cancer drugs for the tumors studied. And to this day, Dr. Souweidane remains committed to improving the outcomes for children with DIPG cancer.

Further research also shows several therapeutic avenues for DIPG that provide hope, including targeted therapies, epigenetic therapy, and immunotherapy. Additionally, “since the development of targeted therapies for DIPG, approximately 250 clinical trials have been initiated against biological pathways in the disease.” Yet, one of the main challenges researchers need to overcome is the effective delivery of treatment across the blood-brain barrier.

For two decades, the DIPG community has had another unwavering ally in finding a cure for this deadly pediatric brain tumor. Dr. Michelle Monje, MD, Ph.D., is a neuroscientist and neuro-oncologist, professor of neurology and neurological sciences at Stanford University and a Howard Hughes Medical Institute Investigator. A recent article for Stanford Magazine chronicles Dr. Monje’s journey, with one of her first major glioma breakthroughs identifying the “role of neurodevelopmental biology in pediatric brain cancer” and the critical importance that the brain’s micro-environment plays in the proliferation of a brain tumor.

Over the years, Dr. Monje has made many other groundbreaking discoveries about how DIPG functions. For example, oligodendrocyte precursor cells (OPCs). which go on to create myelin (the sheath around nerves) through oligodendrocytes, increase at the peak of “the myelination wave that happens at the location (ventral pons) and age range (6 to 8 years) in which DIPG tend to show up.” This finding meant that “dysfunctional OPCs were the genesis of DIPG.”

In a 2019 paper for Nature, titled Electrical and Synaptic Integration of Glioma Into Neural Circuits, Dr. Monje and her colleagues published perhaps one of the biggest discoveries about DIPG cancer — a “synaptic and electrical integration into neural circuits promotes glioma progression.” This discovery meant that scientists identified the highly complex ways that a glioma takes advantage of the brain’s environment to grow.

And, throughout her years of research, Dr. Monje has discovered the growth factor neuroligin-3 and GD-2, a sugar molecule found on the surface of a DIPG tumor — it’s also an almost exact target for CAR T-cell therapy to treat DIPG cancer.

In collaboration with Dr. Crystal Mackall, MD, Ernest and Amelia Gallo Family Professor of Pediatrics and Internal Medicine at Stanford University, Dr. Monje provided insights into using the GD-2 target to treat DIPG, to Dr. Mackall, who was using CAR-T cells to target GD-2 in neuroblastoma.

This collaboration has led to new and promising results through several clinical trials, using rounds of CAR-T cells delivered intravenously and intracerebroventricularly (via lumbar puncture to the cerebral spinal fluid). Not only are the results dramatic in animal models — reducing tumors to almost nothing, but human patients are also seeing a dramatic reduction in the size of DIPG tumors and improvement in symptoms.

And recently, further clinical trials of the GD-2 CAR-T cells for the treatment of DIPG and diffuse midline glioma (DMG) continued to show favorable results as reported by Dr. Monje’s colleague Dr. Robbie Majzner, MD, Assistant Professor of Pediatrics in the Division of Hematology and Oncology at Stanford University at the 2022 American Association for Cancer Research Annual Meeting. Now, the goal is to continue research to find the right dosage, deliverability, and timing to win the battle against DIPG cancer.

Brain cancer is the leading cause of cancer death among pediatric patients. Despite significant improvements in outcomes for some rare pediatric cancers, when current treatments such as chemotherapy, surgery, or radiation fail, there is still an unacceptably low chance of survival for some brain cancers. This is mainly due to pediatric brain tumors being more aggressive and research and funding being insufficient.

Over the past decade, we have funded three DIPG cancer-specific clinical trials and eight additional trials that included the study of DIPG and other types of pediatric brain tumors.

But our work doesn’t stop there. With a focus on innovative treatments, such as immunotherapy, and global collaboration with cutting-edge research scientists and medical doctors, Solving Kids’ Cancer has funded work in more than 110 cancer centers across 15 countries. We are dedicated to pushing the limits of innovation and believe it is possible to find a cure for rare pediatric brain tumors like DIPG.

Help increase DIPG awareness this May — Brain Tumor Awareness Month — by helping fund the development of new, more effective treatment options for children facing the most challenging and deadly pediatric brain tumors. Your gift to Solving Kids’ Cancer will provide patients with brain tumors and their families with the hope of discovering more successful treatment options — because Every Kid Deserves to Grow Up®.