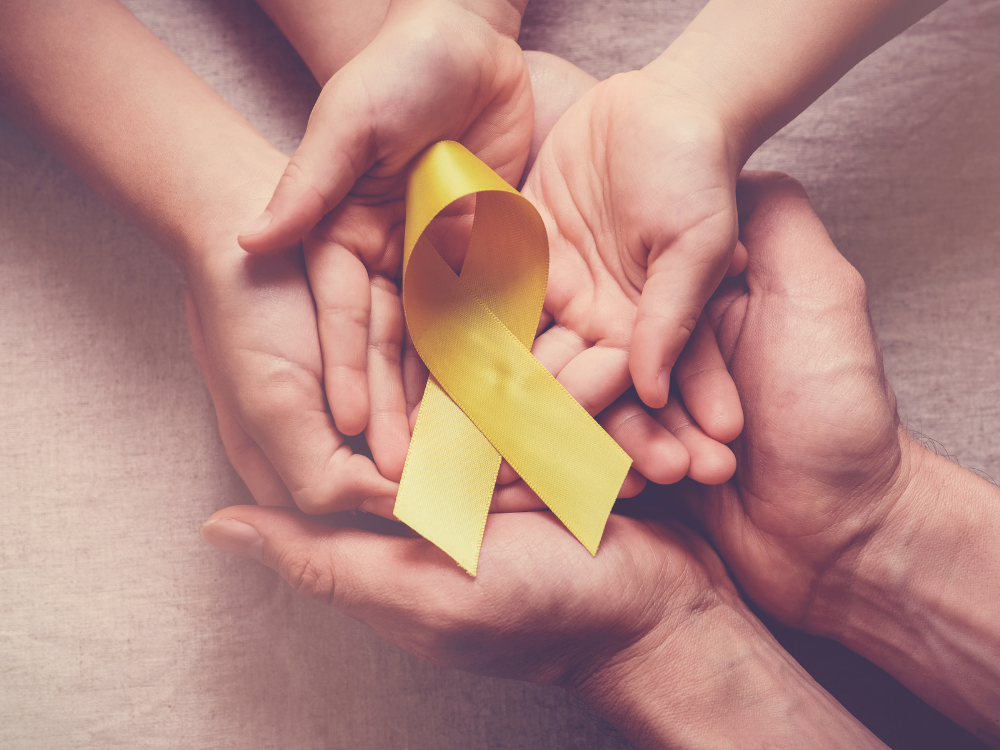 As a childhood cancer charity, Solving Kids’ Cancer focuses on the rarest and most fatal pediatric cancers. By funding early investigational research, both pre-clinical and clinical, Solving Kids’ Cancer helps to expand possible treatment options for kids as well as raise the bar on their standard of care through research advocacy.

This September for Childhood Cancer Awareness Month, Solving Kids’ Cancer is spotlighting the need for increased research on pediatric brain tumors, the leading cause of death among childhood cancer patients. While there have been significant improvements in some childhood cancers, survival rates of rare and aggressive brain tumors are still unacceptably low — mostly due to insufficient funding for research to speed the discovery of cures.

The Challenges of Pediatric Brain Tumors

Pediatric brain tumors are the second most commonly diagnosed cancer in children, representing 29.9% of total childhood cancer deaths1, with 1/3 of childhood brain and central nervous system (CNS) cancers occurring among those aged 5-9. The average age of death is age 9.2

Children who are treated for brain tumors also have the highest risk of serious late effects from their cancer treatment, including second cancers, joint replacement, hearing loss, and congestive heart failure,3  as well as fertility issues due to cranial radiation.

Even with the most intensive traditional therapies, brain tumors are the toughest to treat and overcome, due in part to their aggressive and fast-growing behavior. There is also relatively little research done on them because current, innovative therapies are prioritized for adults and prevalent diseases, which typically bring in more funding.

This is where Solving Kids’ Cancer fills the gap.

At Solving Kids’ Cancer, we help to identify current unmet needs and fund breakthrough research to find cures with fewer treatment side effects for these fatal childhood cancers. We’re primarily focused on funding and advocating the research for brain tumors, including these three: medulloblastoma, embryonal tumor with multilayered rosettes (ETMR), and atypical teratoid rhabdoid tumor (ATRT).

Medulloblastoma is the most common malignant pediatric brain tumor. It accounts for about 20% of all childhood brain tumors.4 The most common age of diagnosis is between 5 and 9 years old, with approximately 350-500 diagnosed each year in the United States.5

Medulloblastoma develops from the back part of the brain called the cerebellum, an area of the brain that regulates balance and coordination. It is a fast-growing tumor that can quickly spread to other parts of the brain and spinal cord.

Some of the signs and symptoms of medulloblastoma include:
• Headaches
• Nausea and vomiting
• Lack of energy
• Clumsiness or loss of balance
• Dizziness
• Change in vision

Medulloblastoma is an aggressive brain tumor that quickly spreads. Once it spreads to the spinal cord, patient survival rates drop to 60%.6

ETMR is a rare and aggressive pediatric brain tumor, attacking the youngest of patients. 92% of children diagnosed with ETMR are under the age of three.7

ETMR is made up of small, round and blue cell tumors originating from embryonic cells that remain in the brain even after a child has been born. Typically, this type of pediatric cancer develops in the largest part of the brain called the cerebrum, but can also be found in the brainstem and spinal cord.

Some of the signs and symptoms of an ETMR tumor include:
• Loss of balance
• Slow speech
• Seizures
• Nausea and vomiting
• Sleepiness or lack of energy
• Eye problems
• Changes in behavior including irritability, aggravation and anxiety

ETMR is a rare brain tumor that behaves very aggressively and grows rapidly. Despite current intensive treatment, survival rates of ETMR range between 0 and 30%, with a prognosis of 12 months.

(ATRT) is a rare and fast-growing tumor of the brain and spinal cord. It is found in fewer than 10% of children with pediatric brain tumors.8 While it’s most often seen in children aged 3 or younger, it can also occur in older children and adults.

Some of the signs and symptoms of ATRT include:
• Headaches
• Nausea and vomiting
• Sleepiness or lack of energy
• Loss of balance, increasing problems with coordination or trouble walking
• Unusual face or eye movements like twitches
• Increase in head size (in infants)

One of the most difficult childhood cancers to cure, ATRT is aggressive and spreads quickly in a short period of time. Even with current therapies, the survival rate of ATRT is at 32.2%.9 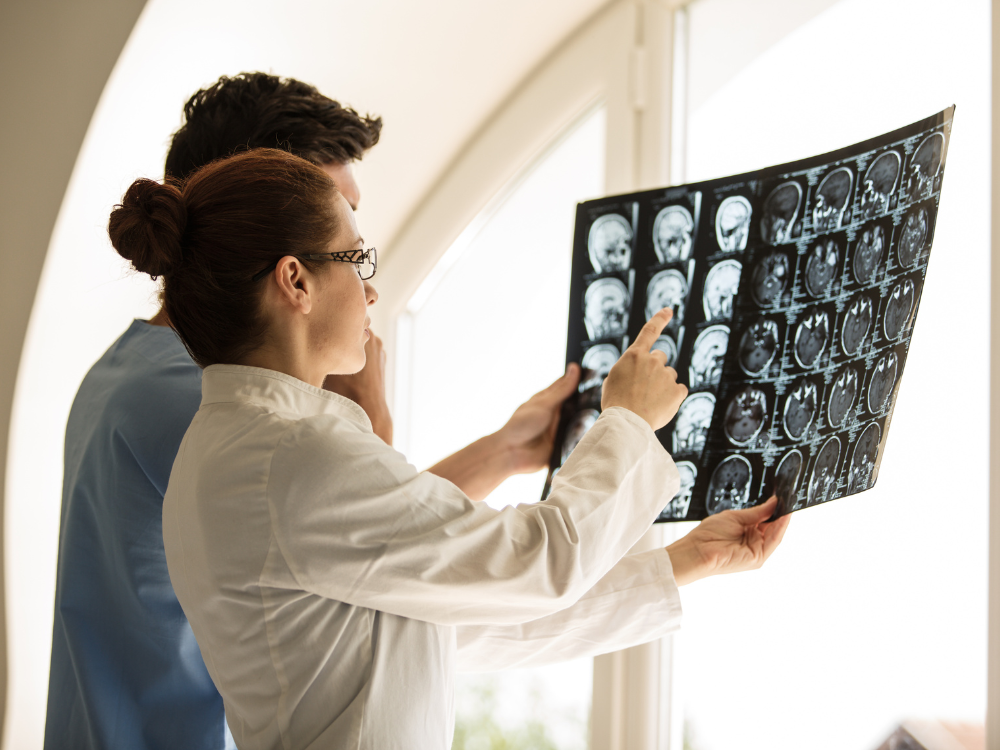 At Solving Kids’ Cancer, we believe that a radical shift in treatment approach is necessary to successfully fight the most deadly pediatric cancers, so we invest in novel therapies that work toward better outcomes for children.

• First-in-Class Immunotherapy for Relapsed and Refractory Pediatric Brain Tumors — This phase I clinical trial will study the use of APX005M, an immune-activating agent, in pediatric patients with recurrent or refractory brain tumors. Immunotherapy is a promising area of investigation in clinical oncology.

• Modified Measles Virus (MV-NIS) for Children and Young Adults With Recurrent Medulloblastoma or Recurrent ATRT — This clinical research of medulloblastoma treatment studied its behaviors and the safety of new drugs, such as the modified measles virus (MV-NIS), traditionally used for other diseases.

• A Protocol for the Evaluation of α-difluoromethylornithine (DFMO) in Pre-clinical Studies for the Childhood Brain Tumors ETMR and ATRT — This clinical study examined the effects of a protocol that used new combinations of effective treatments for ETMR and ATRT.

We’re proud of the incredible work these ground-breaking trials have achieved, but research depends on funding to continue. Children fighting brain tumors are desperate for safer, more effective treatments to give them a second chance.

This Childhood Cancer Awareness Month — help increase awareness of the challenges and unmet research needs of pediatric brain tumors, so we can give hope to more children and their families – because every kid deserves to grow up.

1 Centers for Disease Control and Prevention,  NCHS Data Brief No. 257, September 2016,“Declines in Cancer Death Rates Among Children and Adolescents in the United States, 1999-2014 https://www.cdc.gov/nchs/products/databriefs/db257.htm